Automotive manufacturer of Poughkeepsie , New York.United States from 1910 to 1918. 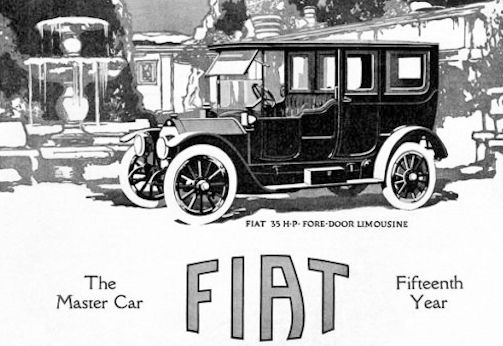 Fiat Automobile Company was an American manufacturer of automobiles most designed by Fiat .

Business people founded in 1909 the company in Poughkeepsie in the US state of New York . It was connected to Fiat SpA.The factory was completed in the spring of 1910. A little later, the production of automobiles began. The brand name was American Fiat . The vehicles were not allowed to be exported. In 1917, Fiat took over the company and finished production in 1918. The work was taken over in February or March 1918, depending on the source of the brothers Duesenberg of Duesenberg or Rochester-Duesenberg .One model was an independent development, the other, however, corresponded to European models of Fiat.

In 1912 the Type 54 remained unchanged in the program. The independent Type 56 came to it. He had a six-cylinder engine with stationary valves , 8600 cc and 45 hp (33 kW) power. The wheelbase was 343 cm. A seven-seat touring car is the only surviving body shape.

In 1913 the assortment consisted of three models. Between the well-known Type 54 and Type 56 ranks the new Type 55 . Its four-cylinder engine produced 42 hp (31 kW) from 9000 cc displacement. The chassis has 325 cm wheelbase. All were available as a seven-seat touring car, five-seat Phaeton , sedan and Landaulet .

From 1917 to 1918, only the Type 55 was on offer. His wheelbase had been extended to 356 cm. Seven-seater Landaulet, five- and seven-seat touring cars, three-seater runabout and seven-seater sedans have been handed down.