Automotive manufacturer of United States from 1913 to 1914. 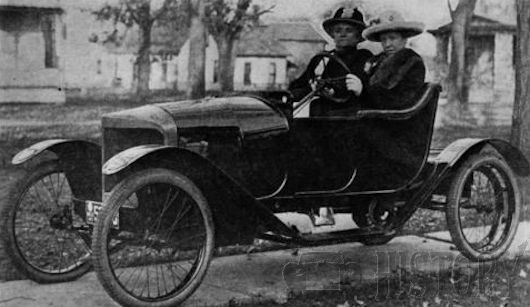 The Fenton Cyclecar Company was an American automaker in Fenton . Owner was George Jenks . In 1913 and 1914 small cars were built there under the name Fenton , which were constructed by Oscar J. Howick , who had previously worked for Packard and Lozier .

Although the vehicles were called Cyclecar , they did not meet the criteria. They had a two-cylinder engine with 88.9 mm bore , 93.2 mm stroke and 1157 cc displacement . It was a V2 engine with air cooling . A friction roller gear and a belt drive transmitted the power to the rear axle. The cooler dummy of the vehicles was strongly V-shaped. The two passengers sat side by side on leather-covered seats. The Roadster was offered for $ 375 (equivalent to $ 9,291 today).

On March 23, 1914 Jenks died. HS Koppin took over the company and renamed it Koppin Cyclecar Company . The Fenton was to be continued under the name Koppin, which did not happen. By the end of 1914, both the company and the car model had disappeared from the market.