Automotive manufacturer of United States from 1952 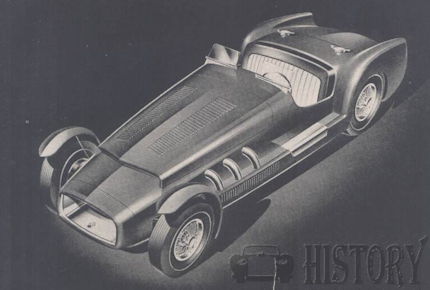 Excalibur J was an American automobile brand that was built only in 1952. The cars were designed by Brooks Stevens . There is no connection to the 1965 built brand Excalibur .

The two-seater Roadster was built on the chassis of the Henry J , from which also engine and drive were taken. Thus, the cars had 2540 mm wheelbase and were powered by six-cylinder in-line engines, which developed from 2638 cc capacity of 125-130 bhp (92-96 kW). The nose was similar to the contemporary Formula 1cars, but in the air intake two closely spaced headlights were installed. The front wheels had hinged fenders.

chassis of the Henry J

Overall, only four copies. Nos. 1 and no. 2 were obtained from the Beassie Engineering Company in Milwaukee (Wisconsin) generated, no. 3 of Ullrich Car Engineering in Evanston (Illinois) , and no. 4 of Bob Webb in Minneapolis (Minnesota) . The sales price of the cars was  at US $ 2500.