Automotive manufacturer of Geneva , Ohio.United States from 1909 to 1911. 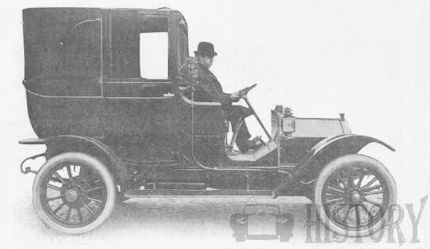 Ewing Automobile Company was an American manufacturer of automobiles and taxis in the first part of the 20th century .

In December 1908, the Cleveland Auto Cab Company announced with great words to present a vehicle from New Year's Day 1909 at the 9th International Motor Show in New York City . The designer was Louis P. Mooers. The brand name was originally Geneva , but eventually Ewing was chosen. The namesake was Levi Edward Ewing, an investor in the company. In 1908, vehicle production began. In the first year, about 30 vehicles were created.

In February 1909 Ewing took over the company and renamed it Ewing Automobile Company . The seat was in Geneva , Ohio . One problem was finding suitable workers. Geneva was a small town that offered little variety at the time. Plans to relocate the plant to Erie in Pennsylvania were not carried out. In October 1909, William Durant took over the company and incorporated it into his General Motors . For 1909 47 vehicles built.  In June 1911 Durant broke up the company. At this time there were six unsold taxis in the factory.