Automotive manufacturer of St. Louis , Missouri.United States from 1909 to 1910. 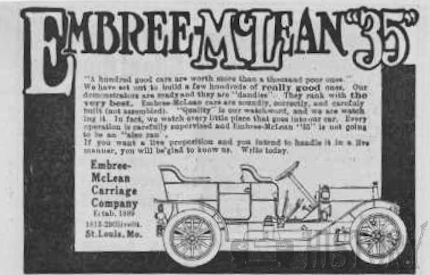 Embree-McLean Carriage Company was an American manufacturer of automobiles in the early part of the 20th century .

The company was founded in 1889 in St. Louis , Missouri . Owners were James G. Embree and Thomas M. McLean. They made carriages . In September 1909, the production of automobiles was announced and carried out from November 1909. The brand name was  Embree-McLean . 500 vehicles were planned annually. in July 1910 followed the bankruptcy . Probably less than 50 vehicles were created by this time.

The offer included three models. All vehicles had different four-cylinder engines . Likewise, they differed in terms of their chassis , as they had different wheelbases .The smallest model had an engine with 30 HP , 267 cm wheelbase and a structure as Roadster .

The medium-sized model had 35 hp, 295 cm wheelbase and was bodywork touring car.The largest model had 40 hp and the strongest engine. Its wheelbase of 305 cm allowed a body as a touring car with seven seats.