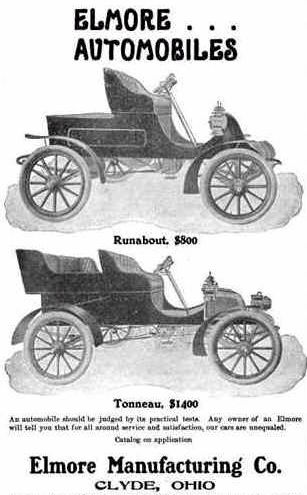 The Elmore Manufacturing Company was an American automobile manufacturer from 1899 to 1912 in Clyde (Ohio) . The company had its name from the nearby town of Elmore, Ohio , where the first production sites were located. The founders of the company were the brothers James and Burton Becker , who first built a bicycle production facility in their father's wood mill and then built automobiles. Elmore equipped his vehicles with two-stroke engines ; most of them were single-row or two-cylinder engines, later also series and four-cylinder engines.

The smallest model in 1903 was the Elmore Convertible Runabout . The four-seat tonneau cost only US $ 650, making it one of the lowest priced vehicles on the market. The horizontally mounted single-cylinder engine in the middle of the car made 6.5 bhp (4.8 kW) and its power was transmitted via a two-speed planetary gear to the rear wheels. The car weighed 476 kg.

The next larger car was the Elmore Runabout . It only had space for 2 passengers and cost US $ 800, -. The standing built two-cylinder engine also sat in the middle of the vehicle and made 8 bhp (5.9 kW). It was a three-speed gearbox installed. The cart with angle iron frame weighed 635 kg.

The top model was the Elmore Tonneau . He had four seats and was for US $ 1400, - to have. The front-mounted two-cylinder engine made 12 bhp (8.8 kW) and was also connected to a three-speed gearbox. Also this car had a frame of angle iron and weighed 680 kg.

In 1907 Elmore produced 400 automobiles, the company's best annual result. In 1908, the three-cylinder two-stroke Elmore caught the attention of William C. Durant , the founder of General Motors . He bought the company for US $ 500,000 the following year and so Elmore became a brand of General Motors. After Durant had to leave General Motors in 1910, the Elmore brand was soon discontinued, along with several other low-end brands. This should give General Motors financial stility.