Automotive manufacturer of Kalkaska , Michigan.United States from 1898 to 1906. 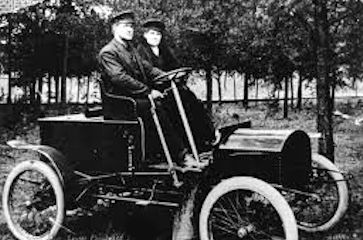 Elmer F. Johnson Cycle Works was an American manufacturer of bicycles and automobiles .

Elmer F. Johnson founded the company in 1863 in Kalkaska , Michigan . He made bicycles. In 1898, a car was created, which was called Elmer . 1905 began the series production of automobiles. The brand name was Johnson . 1908 ended the motor vehicle production.

Brand name Elmer.The first vehicle had a gasoline engine . He drove the rear axle via a two-speed gearbox. The basis was a frame made of bicycle tubes. The wheels were wire spoke wheels. The vehicle was revised in 1901 and 1905 again, when the original engine was replaced by a built-in motor by Cushman Motor Works . The vehicle has been preserved.As brand Name Johnson these were steam cars.  Of these, six vehicles were created, of which the last five were sold to local customers.

From 1901, the company produced commercial vehicles with steam engines.