Automotive manufacturer of California,United States of America from 1961 to 1981. 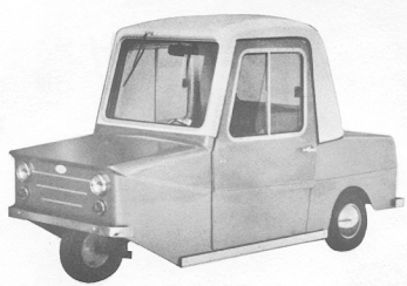 Electra King was an American automobile brand that 1961 to 1981 of the B & Z Electric Car Company in Long Beach California.

In 1961, the electric city carts were presented with a simple, smooth-surfaced, but closed GFK body. There was a two-seat model with fixed doors and a four-seater model, with the sides closed with curtains and the rear seats facing backwards. The drive was a 24 V DC motor with 735 W power. Five 6V batteries (four for the drive, one for the lighting) allowed a range of about 70 km. In this form, the 2565 mm long, three-wheeled wagons were offered until 1966.

In 1974, there was optional foot or hand control, steering wheel or steering column and still three or four wheels. Until 1981, the Elektra King was built, and in recent years, the four-wheeled model fell away again.

Later, B & Z Electric Car stopped producing its own vehicles, but imported foreign electric cars to the US market.