Automotive manufacturer of Detroit , Michigan;USA From 1916. 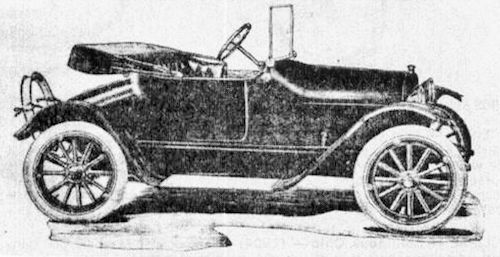 Eclipse Motor Car Company was an American manufacturer of automobiles from the 1910s. The brand name was Eclipse .

AS Keller, PJ Murphy and AP Schulte founded the company in 1916. The seat was in Detroit , Michigan . They made automobiles.In the same year the production ended. The production of trucks , motorcycles and motorboats was at least planned, but it remains unclear whether these products were actually manufactured.

The offer included four models with four different engines. The Model 28 had a four-cylinder engine with 28 hp . The wheelbase was 244 cm. The vehicles were bodyworked as a roadster and could accommodate two people.

The Model 34 had a four-cylinder engine, which was specified with 34 hp. The chassis had 279 cm wheelbase. Then an open body in the form of a touring car with space for five people was mounted.

The Model 40 also had a four-cylinder engine, which, however, made 40 hp. The wheelbase was 292 cm. The touring car was designed seven-seater.