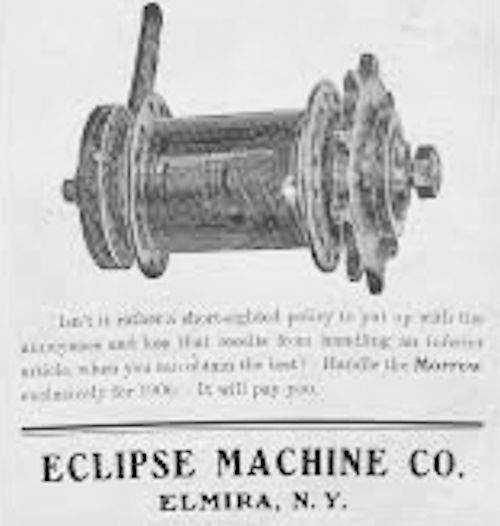 Harmon H. Fulton founded in 1883 the Steel Pulley and Machine Company at Indianapolis in Indiana . A work was in Beaver Falls in Pennsylvania . On 12 August 1895 it moved to Elmira in the State of New York .At the latest in 1896 was renamed it as Eclipse Bicycle Company .In 1890 it presented bicycles. 1896 there were experiments with a horse-free car, which did not go into production. On December 12, 1902, a name change took place in Eclipse Machine Company .

1904, several automobiles were manufactured, which were marketed as Eclipse . The company name in this year Eclipse Manufacturing Company and then again Eclipse Bicycle Company .

1928 took over the takeover by Bendix and 1938 the name change into Eclipse Machine Division . 1944, the company was called Eclipse Machine Division, Bendix Aviation Company and belonged to the Bendix Aviation Corporation for the war production . In 1966, due to a reorganization from the company, the Motor Components Division . The company was founded in 1974 by Facet Enterprises.

The cars included an air-cooled four-cylinder engine with 20 hp power powered the vehicles. The chassis had 239 cm wheelbase . Body style was an open touring car .