Automotive manufacturer of Kenosha , Wisconsin.United States from 1907 to 1908. 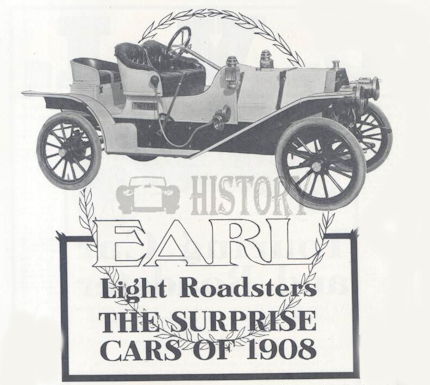 Earl Motor Car Company was an American manufacturer of automobiles in the early part of the 20th century.

The company was founded in the summer of 1907 in Kenosha , Wisconsin . According to their own information, the owners had already started in 1904 in Milwaukeethe development of vehicles and 1905 brought a vehicle on the road. But only in 1907 in Kenosha began the production and marketing of automobiles under the brand name Earl . 1908 ended production. The Petrel Motor Car Company took over the factory.

There was no connection to the Earl Motor Manufacturing Company , which used the same brand name years later.

In 1907 there were only 15 HP . The two-cylinder engine with 15 hp powered by a friction gear and a double chain drive on the rear axle. The chassis had 254 cm wheelbase . The construction as a roadster could accommodate two people tyres 30x3 avaliable in grey or back with red interior.

In 1908 it became the 18 HP . The engine power had been increased to 18 hp. The wheelbase remained unchanged. The Roadster was nicknamed Tiger . There was also the 20 HP . He had a four-cylinder engine with 22 hp. The wheelbase was 269 cm. The vehicle was available as a roadster with an emergency seat and a four-seat touring car $985 .