Automotive manufacturer of Jamestown , New York United States from 1904 to 1906. 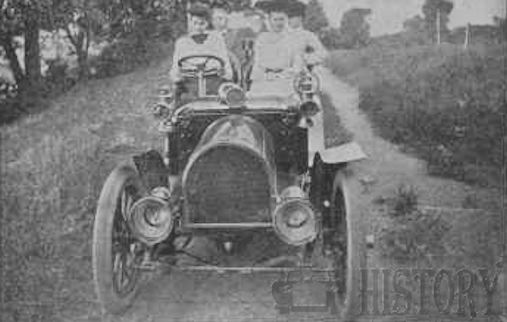 Businessmen from New York founded the Duquesne Motor Car Company in Buffalo in the US state of New York . In early 1904, it moved to Jamestown to accept local benefits. As late as 1904, the production of automobiles began. The brand name was Duquesne . In early 1906, the production ended when the company was sold to RJ Straight. In total, about six vehicles were created. Five or six vehicles were sold.

Production cars had a four-cylinder engine was mounted in the front of the vehicle and propelled the rear axle and stated with 16/21 hp . The round radiator grille was striking. it was an air-cooled engine so the grille would have been a dummy . The chassis had 229 cm wheelbase . The open touring car with two rear doors and side access allowed for five people.electric Starter and the front seat, which automatically folded forward when the rear door was opened. A planned model with a six-cylinder engine no longer appeared on the market.

There was no connection to the Duquesne Motor Car Company of Pittsburgh , which was active a few years later.