Automotive manufacturer of Omaha , Nebraska.United States from 1916 to 1917. 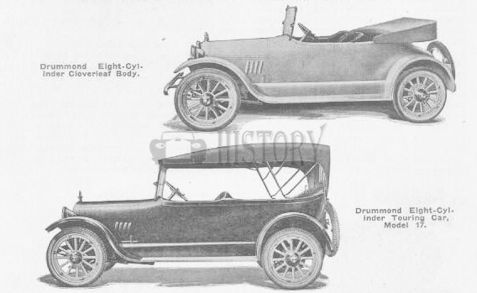 Drummond Motor Car Company was an American manufacturer of automobiles in the 1910s.

James Drummond founded the Drummond Carriage Company in Omaha , Nebraska , in 1906 and produced carriages . In 1909, production was abandoned. Now motor vehicles were repaired.

In 1916 the company was founded in the same city for motor vehicle production. JW Griffith became President, FW Bacon Vice President and General Manager, WL Griffith Secretary and Treasurer, and RW Craig Sales Manager. They started producing automobiles that were marketed as Drummond . 1917 ended the production. In 1918 the company was dissolved.In 1916, 123 vehicles and in the following year 177.  In total, there are 300 vehicles.

1916 were two models in the range. The Four had a four-cylinder engine with 36 hp and a chassis with 318 cm wheelbase . For the Six with a six-cylinder engine 22 HP and 305 cm wheelbase were specified. Both were as a five-seater touring car , two-seater roadster and five-seat Town Car - Limousine available.

In 1917, the Model 17 replaced all previous models. It had a V8 engine from Herschell-Spillman , which was stated with 28 hp. The wheelbase was 305 cm. To the already known touring car and roadster joined a three-seat Cloverleaf Roadster.