Automotive manufacturer of New York .United States from 1915 to 1919. 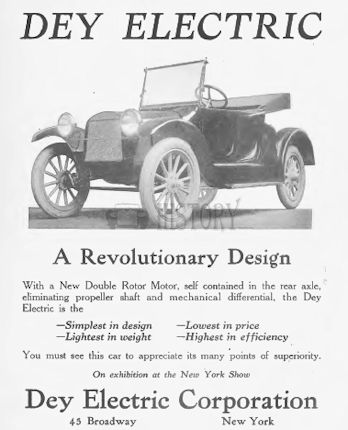 Dey Electric Corporation was an American manufacturer of Electric automobiles in the 1910s.

The company was founded in mid-1915 as the successor to Dey Electric Vehicle Syndicate . The seat was in New York City . Owner and namesake was Harry E. Dey, who led the Dey-Griswold & Company before the turn of the century . The first vehicles were presented in January 1917 at the New York Automobile Show . The brand name was Dey . 1919 ended production. Overall, only a few vehicles.

The offer included electric cars . The electric motor was part of the rear axle and served as a differential . On a transmission could be dispensed with. The chassis had 254 cm wheelbase . The construction was an open roadster or runabout .