Automotive manufacturer of Detroit , Michigan.United States from 1914 to 1915. 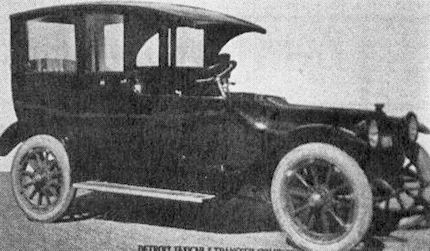 Detroit Taxicab & Transfer Company was an American Automotive company that built taxis from the 1910s.

The Detroit , Michigan, company was in the taxi business. Between 1914 and 1915 cars were created, which were referred to as Detroit Taxicab . In November 1924, the company was still reported.  It is not known when it was dissolved.

The company initially used bought-in vehicles with gasoline engines for eight years . In 1914 there was no supplier of suitable electric cars . As a result, the designer WJ Behn designed his own model. It was designed so that the electric motor could be replaced by a gasoline engine, if the model would not prove itself. The first vehicle was used from 25 June 1914. After a test phase followed 11 other vehicles in January 1915 and 15 more in the fall of 1915. By the end of 20 should still arise. As far as known, it remained with these 47 vehicles. The chassis had 307 cm wheelbase
.