Automotive manufacturer of Anderson , Indiana.United States from 1909 to 1913. 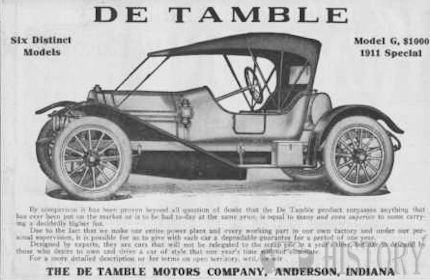 De Tamble Motor Company was an American manufacturer of automobiles from the early part of the 20th century.

Edward S. De Tamble led the Speed ​​Changing Pulley Company in Indianapolis , Indiana . From 1908 to August 1909 automobiles were manufactured there, which were marketed as De Tamble . Three other companies then continued to produce the only model under their own brand names. These were Breeze , Dakota and James .

Edward S. De Tamble founded his own business in August 1909. The seat was in Anderson , Indiana. He continued the production. The brand name was still De Tamble . By 1910, about 2000 vehicles of this brand were created. At the beginning of 1911 insolvency proceedings could be avoided. JJ Appel was now president. Charles H. Walters held various posts. 1911 was a bad year. In 1912 Walters announced an annual capacity of 3000 vehicles, which was not exhausted. Walters was arrested in February 1912. De Tamble threatened bankruptcy . In the same month, James W. Sansberry became general manager. The bankruptcyran until June 1912. In June 1913 came the Aus. Plans for a new beginning from 1 January 1914 could not be implemented.

In November 1915 it was announced that Elmer Eckhouse bought the factory equipment. His plans to continue production were also not feasible.

From 1908 to 1909, was the Model B . A two-cylinder engine with 16 hp power powered the vehicles. The structure is referred to as both a roadster and a runabout and could accommodate two or three people. The wheelbase was 229 cm.

In 1910 this model was a three-seater roadster. In addition came more modern and flatter vehicles with four-cylinder engines . Model C as a five-seat touring car and Model G as a two- seated torpedo had a uniform 287 cm wheelbase and a 30-horsepower engine.

In 1911, Model B remained on the road as a roadster. There were also three four-cylinder models with 36 hp and 292 cm wheelbase. Model G was a two-seat runabout, while Model H and Model J were five-seat touring cars. Largest model was the Model K . The engine made 40 hp. The chassis had 305 cm wheelbase. The open touring car offered space for seven people.

In 1912, the range was limited to the medium-sized model series. The four-cylinder engine with 36 hp remained unchanged. The wheelbase was slightly increased to 295 cm. The choice was Model K as a touring car with five seats, Model L as a torpedo with five seats and Model M as a roadster with two seats.

In the last year 1913 appeared with the model 4-24 a new development. The four-cylinder engine was specified with 17 hp. The wheelbase was 262 cm. A two-seater roadster and a five-seat touring car have been handed down. 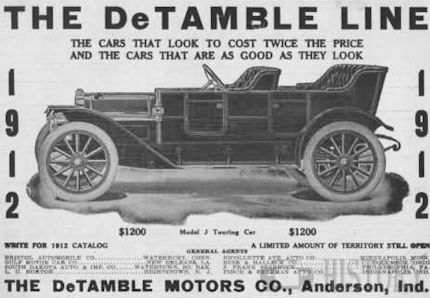