Automotive manufacturer of Dayton , Ohio.United States from 1916 to 1917. 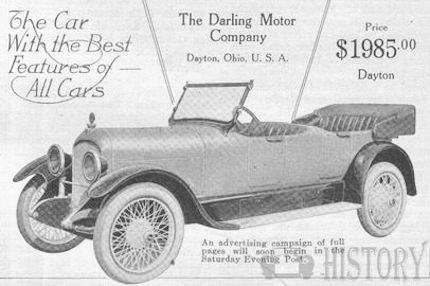 Darling Motors Company was an American manufacturer of automobiles in the 1910s.

George W. Dillman, MM Dugan, JD Frock and others founded the company in late 1916 in Dayton , Ohio . The designer was James Guthrie. They began in 1917 with the production of automobiles. The brand name was Darlling . In the same year the production ended.

The only model was the Six . He had a six-cylinder engine from the Continental Motors Company Continental Type 7 N with 4964 cc displacement . The chassis had 330 cm wheelbase . The open touring car offered space for five people. The original price was 1600 US dollars .

There was no connection to the Beardsley & Hubbs Manufacturing Company , which a few years earlier also produced Darling vehicles..