Automotive manufacturer of Culver City , California United States from 1916 to 1917 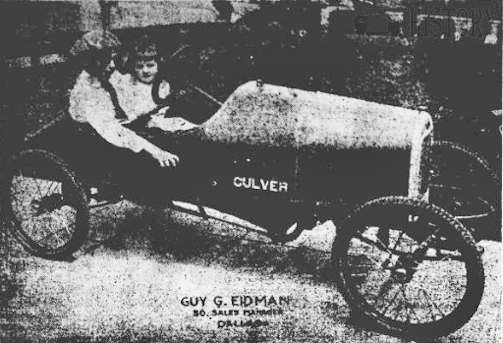 Culver Manufacturing Company was an American manufacturer of small automobiles. The brand name was Culver .

Harry C. Culver, William A. Faris, George E. McHugh, Charles Shillito and George Summerville founded the company in August 1915. The seat was in Culver City , California . In 1916 began the production of automobiles. . In 1917, five vehicles of this manufacturer were registered in California alone. By 1917 ended the production.

The cars on offer was a small self-produced single-cylinder engine with 4 hp power drove the vehicles. The chassis had 168 cm wheelbase . The structure was mostly a runabout or a roadster , occasionally an open one-seater. The original price was $225  .Thought these vehicles were for two adolescents up to 15 years old. However, they could also be driven by adults.

Automotive manufacturer of Culver City , California United States from 1916 to 1917