Automotive manufacturer of Rockford , Ill.United States from 1901 to 1903. 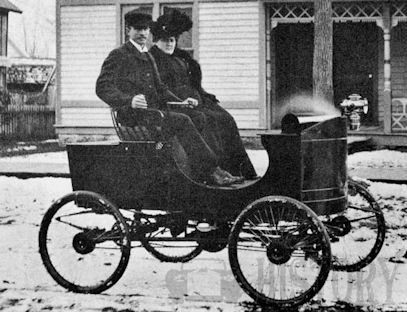 Cotta Automobile Company was an American manufacturer of automobiles in the earl part of the 20th century.

Charles E. Cotta manufactured a steam car in 1901 in his father's company in Lanark , Illinois . In 1902, four more vehicles were built in collaboration with the Love Manufacturing Company of Rockford , Illinois.

Cotta founded his own business in Rockford in January 1903. This is where series production of automobiles began. The brand name was Cotta . The first vehicle was completed in the first month. For the rest of the year, ten more vehicles were planned. As early as November of the same year, Cotta sold the patents to the Four Wheel Drive Wagon Company . This ended the production. Overall, between 6 and 16 vehicles were created.

It was a steam car. The steam engine had two cylinders and made 6 hp . It was mounted as a mid-engine in the center of the vehicle and drove chains on both the front and the rear wheels. In addition, all four wheels were steered. Four-wheel drive and four-wheel steering were then completely unusual
.