Automotive manufacturer of Grand Rapids , Michigan.United States from 1932 to 1934. 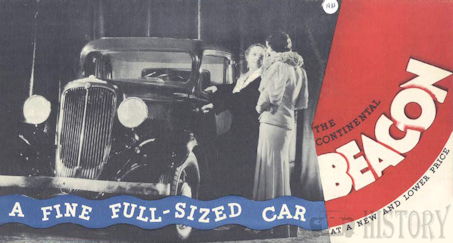 Continental Automobile Company was an American manufacturer of automobiles in the 1930s .

The company was founded in November 1932 in Grand Rapids , Michigan for automotive production. It belonged to the engine manufacturer Continental Motors Corporation . The brand name was Continental . 1934 ended production.

The vehicles were the successor of the models of the brand De Vaux . The offer included three models.

The Beacon was introduced in 1933 and remained the only one until 1934 in the range. He had a four-cylinder engine with 38 hp . The wheelbase was 258 cm. For the first year, a two-seater roadster , a commercial coupé and two- and four-door sedans were available , with coupé and limousines in standard and luxury versions. In 1934, the offer was limited to a coupe, a two-door sedan and a four-door sedan in standard and luxury execution. The Beacon was the second cheapest car in the American market - according to the models of theAmerican Austin Car Company .

The flyer was only in 1933. He had a six-cylinder engine , which made 65 hp. The chassis had 272 cm wheelbase. A two-seater roadster, a commercial coupe and two- and four-door sedans have been handed down.

The Ace , which also existed only in the 1933 model year , was the strongest and most expensive model. Its six-cylinder engine made 85 hp. The wheelbase was 290 cm. The offer included a coupe with an emergency seat and five-seater limousines in standard and luxury versions. 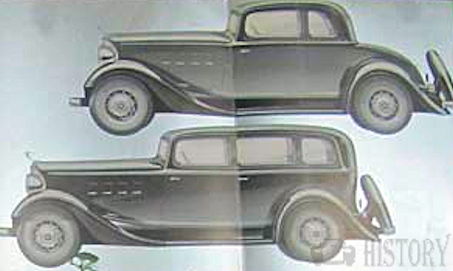