Automotive manufacturer of Detroit , Michigan.United States from 1911 to 1912. 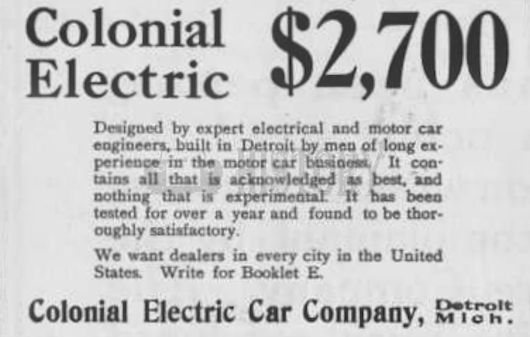 Colonial Electric Car Company was an American manufacturer of Electric automobiles only in the 1910s.

Mark W. Allen, Otto F. Bartlett, LC Moore, AD Stansell, William E. Storms, Albert Webb and Fred C. Willis founded the company in September 1911. The head office was in Detroit , Michigan . They began in 1912 with the production of automobiles. The brand name was Colonial . The competition was huge, especially by the Detroit Electric Car Company from the same city. In June 1912, a motoring magazine reported a small local sales success. Later in the year the production ended. There were rumors that General Motors wanted to buy the company, but they did not confirm it.

There were no links to the other manufacturers of Colonial vehicles : Colonial Automobile Company , Colonial Motors Corporation and Colonial Carriage Company .

The offer was exclusively electric cars . The top speed was specified with 40 km / h and the range with 120 km. The chassis had 236 cm wheelbase . The construction as Brougham offered space for five people. A three-seater coupe remained a prototype
.