Automotive manufacturer of Parsons , Kansas,United States from 1901 to 1903. 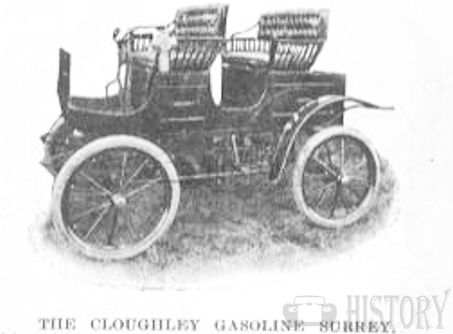 Robert H. Cloughley worked from 1891 on an automobile. In 1896 the first steam car was ready. In April 1901, he founded the Cloughley Automobile Manufacturing Company in his hometown Cherryvale , Kansas . Here production began on a small scale. The brand name was Cloughley . The owner of the Tannehill Manufacturing Company bought the first vehicle. In early 1903, the move to Parsons in Kansas followed and renamed Cloughley Motor Vehicle Company . In the same year 1903 the production ended.

The steam engine of 1896 was, according to a source, the first of its kind to be built west of the Mississippi River . Cloughley put him as a taxi one. The boiler was mounted under the rear seats. The construction was a Surrey . It is unclear whether until 1901 more taxis were created.

From 1902 to 1903 there was the model Steam . This was also body shelled as Surrey. The steam engine had two cylinders and made 8 hp .

In 1903, two models with gasoline engine supplemented the range. They had twin-cylinder engines . The performance was stated with 9 hp for the weaker model and 12 hp for the stronger model. The superstructures are no different from the steam cars.