Automotive manufacturer of Lansing , Michigan.United States from 1902 to 1905. 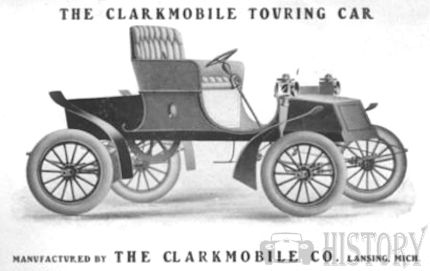 Clarkmobile Company was an American manufacturer of automobiles in the early part of the 20th century .

Frank G. Clark founded the company in April 1902 in Lansing , Michigan . At the beginning of 1903 he started producing automobiles. The brand name was Clarkmobile. 1904 ended the production. In January 1905, Clark sold everything to the New Way Motor Company .

Clark founded the Furgason Motor Company in 1910 in the same city.

The offer was only a model. A single-cylinder engine with 7 hp power was mounted under the seat and powered by a propeller shaft to the rear axle. The chassis had 183 cm wheelbase . The open runabout accommodated two to three people.