Automotive manufacturer of United States from 1910 to 1912. 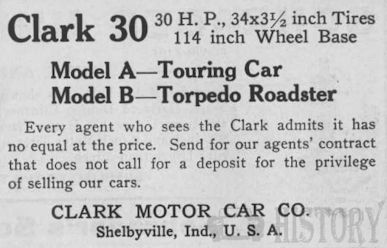 The Clark Motor Car Company was an American automaker. It existed from 1910 to 1912 and was based in Shelbyville (Indiana) USA .

They manufactured mid-size Touring and roadster automobiles with four-cylinder engines from the Rutenber Motor Company .

In June 1912, the company founded two years earlier had to file for bankruptcy, but production was maintained. As late as 1912, Clark had to admit that profitable car manufacturing was not possible for him and sold his factory to Maurice Wolfe's new company, the Meteor Motor Car Company in Piqua, Ohio .