Automotive manufacturer of Marion, New Jersey.United States from 1904 to 1907. 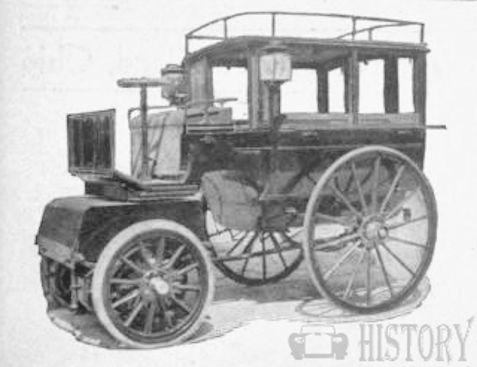 The Cantono Electric Tractor Company was an American manufacturer of electric automobiles . The company exclusively produced Avant-Trains after an Italian patent . The brand name was Cantono Electric .

The company was founded in 1904 in Marion (New Jersey) and acquired from Cantono in Rome the license to reproduce vehicles of the Italian manufacturer and licensor. Thus it produced biasing devices, so-called fore carriages , as well as complete passenger cars. Unlike the Italian company and unlike its own name, the Cantono Electric Tractor Co. decided not to produce commercial vehicles.

The idea, though applied by several manufacturers, proved to be a technical dead end. At the end of the life of the converted carriages Avant-Trains were usually replaced by better and cheaper light commercial vehicles. Occasionally, a fore carriage was adapted from one vehicle to another, but it did not generate lasting demand. In the US, with its growing auto industry, it did not suffice in 1907 to keep the company alive,

The fore carriage is a vehicle component that is mounted in place of the front axle and drawbar of horse-drawn vehicles, making them to motor vehicles. Avant-Trainswere available with combustion , steam or electric motors . The Cantono system is based on the latter. It consists of the axle itself, the fifth wheel steering with steering column and steering wheel , the battery pack mounted on the axle and the front wheels, each driven by a DC motor. The electric motors drive over gearseach one of the front wheels and also act as front brakes. The steering column is vertical on the vehicle. The cars made in the US are literally "carriages without horses". Most were built as noble brougham and marketed as such .

The vehicles of the Cantono Electric Tractor Company  using Exide 44 cell batterys 4 speed forward 2 speed reverse.Motors 2 one on each wheel with 5HP total