Automotive manufacturer of Chicago , Illinois.United States from 1900 to 1929. 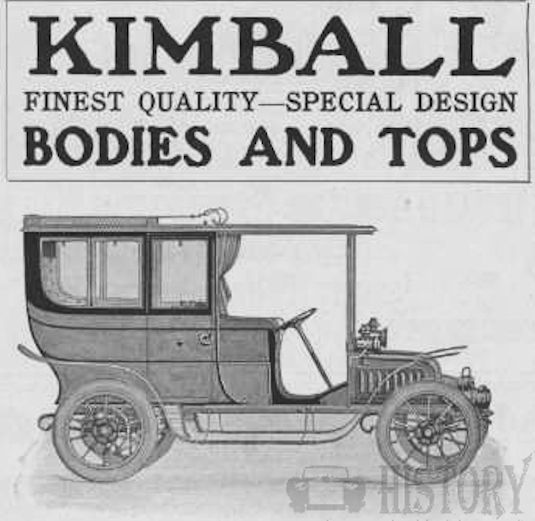 CP Kimball Company , before as CP Kimball & Company , was an American coachbuilder and manufacturer of carriages , bodies and automobiles from the early part of the 20th century.

The company was founded in 1847 in Portland , Maine . Initially it manufactured carriages. In 1877, the company was renamed and relocated to Chicago , Illinois . In 1900 started the production of car bodies and automobiles. The brand name was Kimball . Only between 1910 and 1912 were the motor vehicles officially offered. In the period before and 1913 they were made only according to customer orders. In 1929 the company was dissolved.

The offer included electric cars . A source indicates 10 hp motor power for the electric motors , power transmission via two chains to the rear axle, a range of 120 to 160 km, solid rubber tires and steering by means of steering wheel .

Between 1910 and 1912 there were three models. Model E-7 and Model E-8 had 183 cm wheelbase . The former was an extension coupe and the second a Victoria Phaeton . The model F-10 had a chassis with 254 cm wheelbase and was body shelled as Landaulet .

In 1912 there was George IV as Phaeton and Special Design as a coupe. For both models, the wheelbase was 208 cm.
Kimball Limousine from 1908 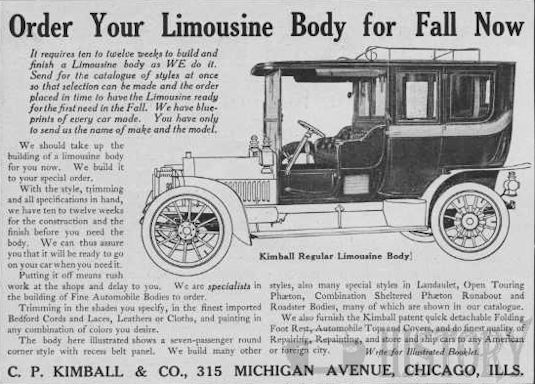