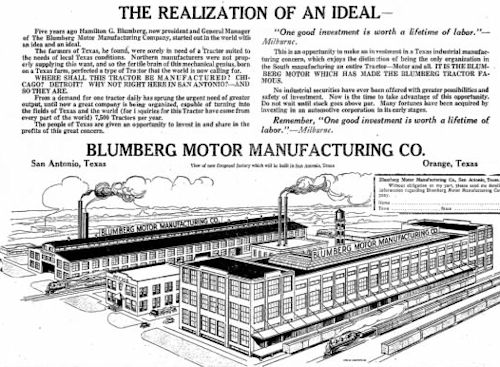 The Blumberg Motor Manufacturing Company was an American manufacturer of automobiles and also tractors.

The company was founded on June 1, 1914 in San Antonio , Texas as a family business. Hamilton Gustave Blumberg became president, his brother Randolph Julius vice president, and his brother-in-law AD Fischer treasurer. In addition, the uncle HD and Joseph Hierholzer were in the company. In August 1915, the company was officially registered. The headquarters were moved to Orange , also in Texas. The main product was an engine, which was mainly installed in tractors . In addition, from 1915 to 1922 some passenger cars , which were marketed as Blumberg . After abandonment of the vehicle production still parts were manufactured as well as vehicles of the Mitchell Motors Company sold. 1925 the enterprise was dissolved.

The engine was designed by Hamilton Blumberg. It was claimed that he would work so cool that neither fan nor radiator grille would be needed.

For the cars were both four-cylinder engines and V8 engines to choose from. A seven-seat touring car is handed down, which was offered for $ 3,000 . Many parts were made by myself.

The tractors were marketed as Blumberg Steady Pull . It seems to have dealt with conventional constructions, which were probably developed from 1914 and came to 1915 on the market. First, the Steady Pull 12-24 appeared with the said in-house four-cylinder engine. The bore and stroke , probably rounded, are 4 × 5 inches (101.6 × 127 mm), giving a displacement of 250 cubic inches (about 4.1 liters). The type designation usually refers to the power at the drawing bar (12 bhp) and at the power take-off (24 bhp).

In 1919, the program was expanded to include the Blumberg Steady Pull 9-18 . The model was a scaled down version of the 12-24 . Typically, tractor engines of this time were designed long-stroke , with a bore that was about 70 to 80 percent of the stroke. However, this tractor received a well-developed also in-house four-cylinder engine with a square bore / stroke ratio of 3.75 inches (95.25 mm). This results in a displacement of 165.7 cubic inches or 2.7 liters. After 1924 Blumberg tractors are no longer detectable.