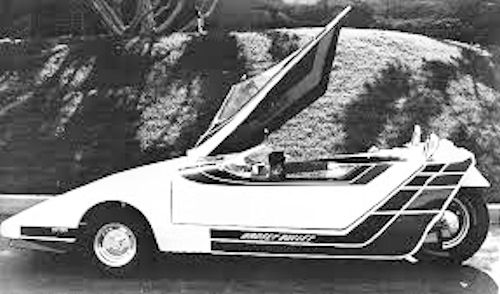 Bill Badsey Racing USA, Inc. was later a US automaker .The South African William John Badsey, had manufactured since 1981 in South Africa in his eponymous company Bill Badsey three-wheeled automobiles . In 1983, production ended there  From the 1980s, also the company hired scooters. The brand name continued to be Badsey ,

Already on September 8, 1982 he founded in Ventura in the US state California Bill Badsey Racing USA, Inc. He continued production. Production continued until 1999. .The company was the last to announce Rosemead in California. It is not known when the company was dissolved. The last archived version of the website is from 2014.

The Badsey Bullet made from 1981, first in South Africa and from 1983 in the United States. This was a tricycle with a rear single wheel. 1998 this model was discontinued. Of these eight vehicles emerged  The Unique Vehicle & Accessory Company of England offered the model from 1982 onwards as a kit and as a complete car in England, but did not sell anything.

The two-seater, which had two front wheels and one rear wheel, was available since 1981 with both right-hand and left-hand drive. The engine was an air-cooled, transversely installed four-cylinder engine with a displacement of 1074 cm³ and an output of 77 kW, which was developed by the company and was mainly made of aluminum . T

In 1984 the Japanese Yamaha Motor Company bought the patents for the Badsey Bullet, under which the model was finally developed into the amphibious and watercraft Yamaha Wave Runner . However, this was only offered on the Japanese home market. Furthermore, the design of the ItalDesign Aztec , which was produced in small series from 1988 to 1992, was based on that of the Badsey Bullet.