Automotive manufacturer of Reading, Pennsylvania, United States From 1909 to 1911. 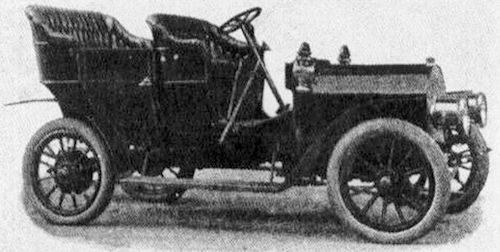 Bertolet Motor Car Company was an early American manufacturer of automobiles . The brand name was Bertolet.

JM Bertolet made from 1908 individual automobiles, which he sold as JM Bertolet . It was not until 1909 that he founded the company in Reading , Pennsylvania . In 1910 the company was dissolved. Vehicles were created until 1911 from existing parts.

First there was the model type X . It had a four-cylinder engine with 40 hp . The chassis had 259 cm wheelbase . A five-seat touring car was the standard body. Similarly, there was a change body to make a touring car a runabout .

In 1910, the Model 40 was in the range. The engine remained unchanged. The wheelbase was extended to 279 cm. The only body shape was a five-seat touring car.