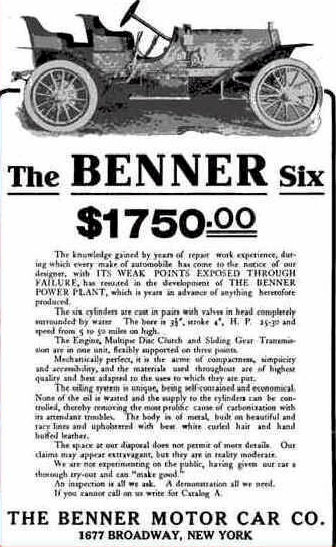 Benner Motor Car Company was an early American manufacturer of automobiles in the 1900s . The brand name was Benner .

RP Benner repaired and studied automotive engines in his workshop in New York City starting around 1900 . In May 1908 he founded an independent company for automobile production on Broadway . In October 1908 began the production of automobiles.  In 1909 the production ended. In total, around 200 vehicles were created.

The only vehicle series was called Six . A self-developed six-cylinder engine with OHV valve control powered the vehicles. The engine power was given as 25/30 hp . The chassis has 254 cm wheelbase . There was a choice of Model A as a two-seater runabout , Model B as a three-seater roadster and Model C as a four-seater Tourabout .