Automotive manufacturer of Willoughby, Ohio, USA from 1916 to 1918. 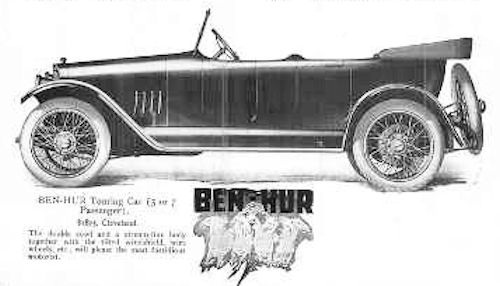 Ben Hur Motor Company was an American manufacturer of automobiles in the 1910s.

LL Allyn founded the company in 1916 in Willoughby , Ohio . He started producing automobiles that were marketed as Ben-Hur . By February 1918, about 30 to 40 vehicles were produced. At that time, the production capacity was 20 vehicles per day, but the plans were limited to 5 to 10 vehicles per week. In May 1918, the bankruptcy followed.The designer was BP Bagby, who founded the Midwest Motor Company following the bankruptcy of Ben-Hur Motor Company .

The only model was the Six . This had a six-cylinder engine from Buda with 29 hp . The chassis had 320 cm wheelbase . There was a choice of four-seater roadster , seven-seater touring car and seven-seat touring sedan .