Automotive manufacturer of New Haven , Connecticut.United States from 1909 to 1910. 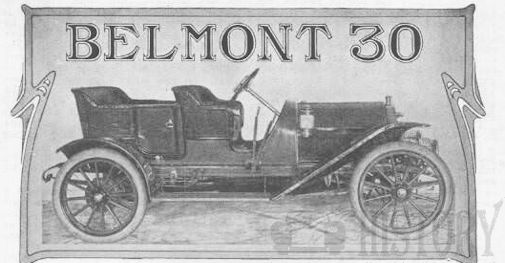 The Belmont Automobile Manufacturing Company was founded in May 1909 in New Rochelle , New York . C. Baxter Tiley of the Tilex-Pratt Company is named as an important person. In late summer, the company moved to Castleton -on-Hudson , also in New York, and now renamed as Belmont Motor Vehicle Company . At that time, Arthur C. Cheney became secretary and treasurer. In early 1910, the first name was reintroduced and relocated to New Haven , Connecticut . The production of automobiles ran from 1909 to 1910. The brand name was Belmont, In August 1910, the bankruptcy followed .

There was no connection to the Belmont Electric Automobile Company , which used the same brand name.

The offer was the Thirty , English for 30. He had a four-cylinder engine with 30 hp . The chassis had 279 cm wheelbase . The Model A was a four-seat tonneau and the Model B a five-seat touring car .Plans for a model Liberty were not implemented
.