Automotive manufacturer of Kansas City , Missouri,United States from 1919 to 1923. 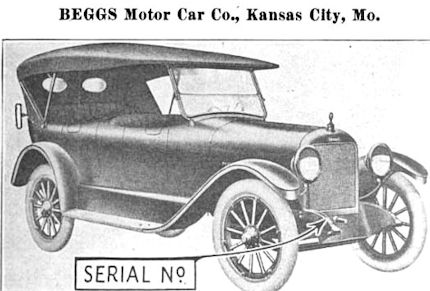 The Beggs family manufactured wagons from around 1892 under the name Beggs Wagon Co. In 1919, a separate company was founded for the automotive industry. SM Beggs was President , CF Hutchings and JS Lapsy were the Vice Presidents and Earl Akers CFO. The brand name was Beggs .1923 ended production. In total, over 200 vehicles were created.

The first Beggs was 1919 Model 19 Touring with a supplied by the Continental Motors Company six-cylinder engine with 25 hp. The vehicles were, as usual at that time, assembled from purchased standard components.

From 1920, the models were equipped with a self-developed water-cooled L-head six-cylinder engine with 25 hp. The engine had a bore of 3 1/4 inches (83 mm) and stroke of 4 1/2 inches (114 mm). It was equipped with a Stromberg carburetor, ignition of Connecticut Telephone & Electric Co. , Exide battery, and an auto-light alternator. In addition, the Beggs Automobile had a three-speed gearbox, a Stampar rear axle and 33x4-inch wheels (84 × 10 cm) with Firestone tires. The wheelbase of the chassis was uniformly 120 inches or 305 cm.