Automotive manufacturer of New York ,United States From 1895 to 1899. 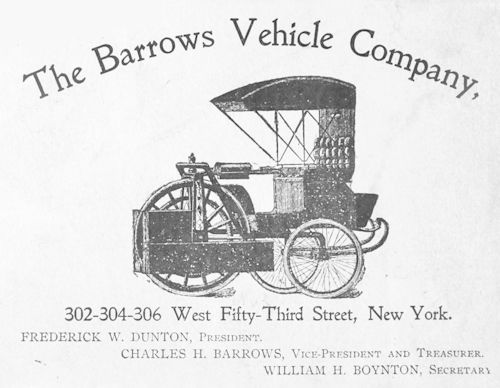 Barrows Vehicle Company was an early American manufacturer of automobiles . The brand name was Barrows .

Charles H. Barrows, William H. Boynton and Frederick W. Dunton founded the company in 1895. The seat was in Manhattan in New York City . They started with the production of automobiles.

The Lengert Company from Philadelphia was a licensee , but it is unclear whether they actually produced vehicles.

The model was an electric car designed by Charles Barrows. The vehicle had two wheels in front, which were arranged close to each other. In between was depending on the source of the battery or the entire drive unit. The top speed was 6.4 km / h in first gear, 12.8 km / h in second gear and 19.2 km / h in third gear. The reverse gear allowed speeds up to 6.4 km / h. The choice was between one and four-seater bodies.