Automotive manufacturer of Sandusky, Ohio.United States from 1907 to 1910. 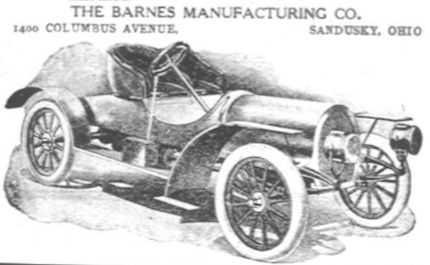 Barnes Manufacturing Company was an American manufacturer of automobiles in the 1900s .

The company was founded in 1907 in Sandusky , Ohio . In the same year began the production of automobiles.

The brand names were Barnes This brand existed from 1907 to 1910. An air-cooled four-cylinder engine powered the vehicles. The only body shape was a roadster.

Also as Servitor .This brand was only 1907 on the market. The cars also had an air-cooled four-cylinder engine. The engine power of 20 hp was transmitted via a patented two-speed planetary gearbox and a cardan shaft to the rear axle. The wheelbase was 229 cm. He was only available as a two-seater roadster. The original price was $1250. 1910 ended production.