Automotive manufacturer of Connellsville , Pennsylvania , USA From 1899 to 1901. 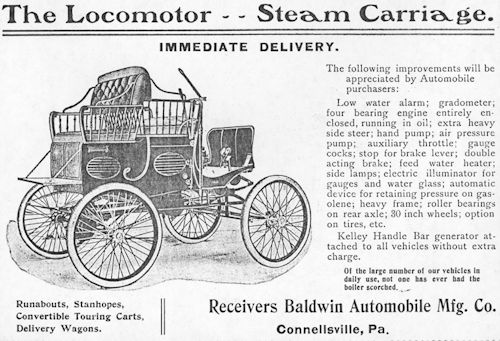 LFN Baldwin designed a steam car in 1896 . Production took place at Cruickshank Steam Engine Works in Providence , Rhode Island . The buyer was the local department store Shepard & Company . The trade name was Baldwin , possibly with the addition of steam  . In 1898 he started with a second vehicle, which he completed in 1899. Also in 1899 he founded the Baldwin Automobile Company in Providence. Horacio Fraser was the president of the company and Chester Campbell his secretary. Mid-1900, the name changed to Baldwin Automobile Manufacturing Company and again in 1901 Baldwin Motor Wagon Company . 1901 ended production. Baldwin then founded the Baldwin Automobile Manufacturing Company in Connellsville , Pennsylvania .

The first vehicles were steam cars. The first was a delivery van . The second vehicle had a two-cylinder - steam engine . The engine power was transmitted by means of a chain to the rear axle. The open body could accommodate four people. The maximum speed should have been 40 km / h.

The production of automobiles began, which were marketed as Baldwin . Mid-1900, due to financial problems to a production interruption. From March 1901 to September 1901 was again produced. The company was later dissolved. In part, 160 employees worked in the company with no production after late 1903.

They produced a total of twelve vehicles. The American Locomotor Manufacturing Company continued production under its own name.

The various 2 seater models that was driven steam . The steam engine had a 2-cylinder double-acting vertical engine.