Automotive manufacturer of Xenia , Ohio.United States from 1902 to 1903. 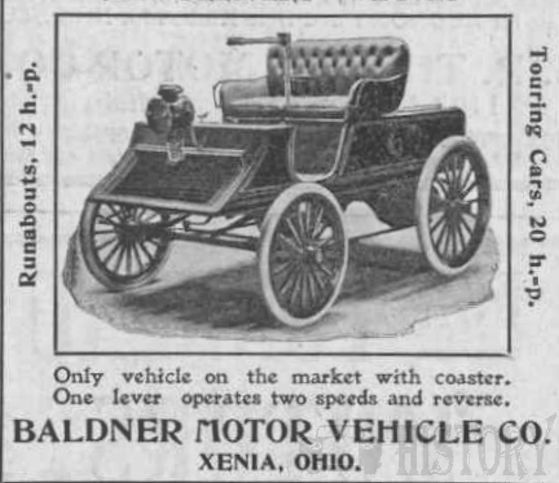 Baldner Motor Vehicle Company was an American automaker in the early part of the 20th century .

Jacob Baldner, who had already gained experience in automotive engineering in collaboration with Charles E. Duryea , and his brother Fred came from Xenia , Ohio . They made a prototype in 1899 and began in 1900 with the production of automobiles under the brand name Baldner . It was not until 1902 that they founded the company. 1903 ended the production. In total, nine vehicles were created.

Fred Baldner was later involved in the construction of the Xenia .

The prototype had a two-cylinder engine . The open body could accommodate two people. It was steered with a steering lever.

In the production models, a three-cylinder engine was used. 1902 made the engine 8 hp . The wheelbase was 183 cm. The only body shape was a runabout .

1903 were two models in the range. The weaker model had a 12 hp engine (9 kW) and was a runabout. The more powerful 20 hp model (15 kW) was available both as a touring car and as a light commercial vehicle . The chassis now had 193 cm wheelbase.