Automotive manufacturer of Fullerton California.United States from 1924 to 1925. 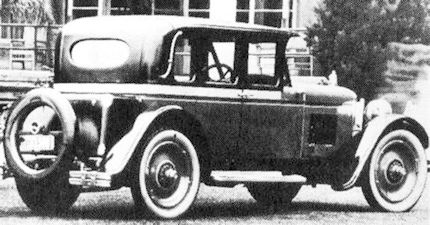 The Balboa Motor Car Company was a short-lived US automaker in the mid-1920s .

The Balboa Motor Car Company was based in Fullerton, California . The brand name was Balboa .Shares were issued and construction of a factory in Pomona started . Production was scheduled to begin in October 1924 with a planned annual output of 1000 vehicles, but for the moment, one had to be satisfied with the former premises of a wire factory in Fullerton. Kessler super-charge eight-cylinder engine , the chief engineer Radford had brought from his former employer. Balboa put eight years of development work in it. It was a top-mounted inline engine with the integrated compressor . The innovative approach was to integrate a pressure vessel in the crankcase ; the pressure was built up by the downward movement of the pistons . Like the Kess-Line Eight built in the smallest quantities , the Balboa Eight should also provide  A power over 80 bhp was reserved for a few high-priced automobiles mid-1920s.

Heinz had worked with Fred M. Guy at the Hackett Motor Car Company in Jackson and later in Grand Rapids, Michigan . There he was involved in the development of the Guy four-stroke - flat slide motor involved. Its outstanding technical feature was top perforated discs in the cylinder head instead of valves; These were not driven by a camshaft , but by gears . When Hackett had to close, they took the engine to Ypsilanti, Michigan, with their new employer, the Apex Motor Corporation, There, the engine was used as a six-cylinder in small numbers in the series Ace Model T and Rotary Six . The founding of the Heinz Motor Company for automobile production was announced, but did not happen. Instead, he helped build the Fred Guy Guy Disc Valve Motor Company .

The Balboa Eight was not meant for motor sports. The only initially provided chassis had a stately wheelbase of 127 inches (3226 mm). This as well as the targeted sales price of US $ 2900 for a five-seat touring positioned the vehicle in the lower part of the luxury segment.

The company began in early 1924 to advertise its car in ads. The slogan was: It 's Beauty You Must See, it's Genuiness Only Close Inspection Disclosed ; translates as: "You can see its beauty, its autonomy only shows up on closer examination". In a former wire product factory organized by board member Bliss, three chassis were created, two of which received a body of unknown origin. One was a Touring, the other a Sport Brougham four-door with leather-covered roof and implied Sturmbügeln, Both showed a European influence with fenders, which were not connected to the footboard. The spare wheel was carried along at the rear. Because the super-charge engine was not yet ready, all three were purchased Continental row-eight cylinder engines. The Balboa Motor Car Company closed in 1925.