Automotive manufacturer of Columbus , Wisconsin.United States from 1909 to 1911. 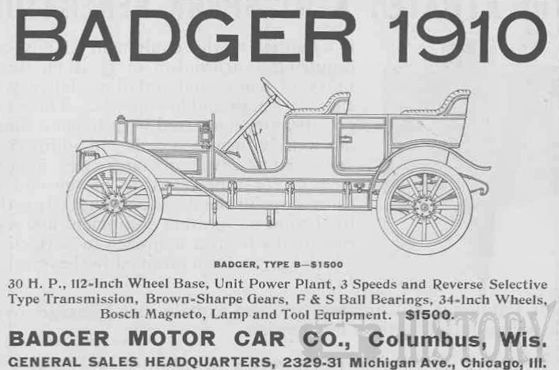 Badger Motor Car Company was an American manufacturer of automobiles in the early part of the 20th century .

AM Bellack, Charles E. Fowler, JR Wheeler, George C. Holtz and EW Arbogast founded the company in 1909 in Columbus , Wisconsin . Bellack was President, Fowler Vice President, Wheeler Treasurer, Holtz Secretary and Arbogast the Constructor. In November 1909 the factory was completed. Well, or only in 1910, began the production of automobiles. The brand name was Badger . In 1911, production ended when the company went into liquidation . A total of 237 vehicles were created.

1910 were three models in the range. They had a four-cylinder engine from the Northway Company it made 30 hp , which was described as too weak. The wheelbase was 112". The Model A was a Tonneau , the Model B , a touring car and the model C a Roadster .

In 1911, the wheelbase of the chassis was reduced to 279 cm. The engine remained unchanged. Called Model B as a touring car, Model C as a roadster and Model D as a four-door touring car.