Automotive manufacturer of Chicago , Illinois.United States from 1906 to 1914. 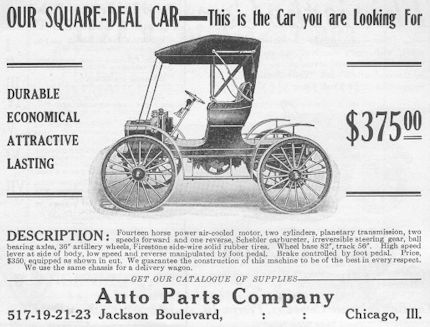 Horace W. Book, Arthur B. Pease and Albert H. Frys founded the company in the summer of 1906. The seat was on West Jackson Boulevard in Chicago , Illinois . 1907 began both the production of automobiles and the advertising for it. The brand names varied over the next few years. In November 1909, it was announced that the Harrison Motor Car Company , the Logan Construction Company and the Monarch Motor Car Company were acquired. 1914 ended production.

The Brand Name Chicago Flyer: This brand name was used in 1907.

Brand name Touraine: Under this name, a vehicle was also offered in 1907. A 22- horsepower, water-cooled two - cylinder engine powered the rear axle via a two-speed planetary gearboxand propeller shaft . The chassis had 254 cm wheelbase . The open touring car offered space for five people. The original price was 1500 US dollars . For comparison: A smaller and weaker Ford Model R cost as two-seat runabout only half.

Brand Name Square Deal :This name was only in 1910. It was a highwheeler with a two-cylinder engine, which made 14 hp. The wheelbase was 208 cm.

Brand name Oswald: The Oswald of 1911 was a runabout.

Brand name Yankee: The only model was created in 1914. It was called a cycle car, but it is unclear whether it meets the criteria for displacement and curb weight for cycle cars. The four-cylinder engine made 18 hp. The wheelbase was 259 cm.