Automotive manufacturer of Portland , Oregon.United States from 1967 to 1968. 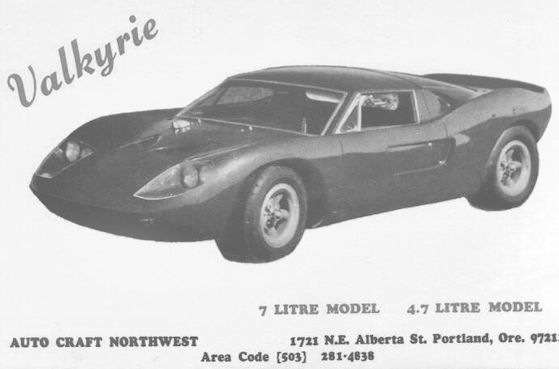 Auto Craft Northwest was an American manufacturer of automobiles in the 1960s .

The company was based on NE Alberta Street, Portland , Oregon. Between 1967  and 1968  it manufactured automobiles and kit cars . The brand name was Auto Craft Northwest .

One model was a VW buggy it was based on a chassis of the VW Beetle . An air cooled four cylinder boxer engine in the rear propelled the vehicles.

The Mk III was a sports car on the same basis. It was similar to a model of Fiberfab , the Valkyrie had a 98" wheelbase steel tube chassis,the installation of V8 engines from Chevrolet 7 litre 450hp  version for $12,500 and the six-cylinder boxer engine 4.7 litre 300hp  from the Chevrolet Corvair for$7,500  avalable.