Automotive manufacturer of Wisconsin,United States of America from 1968 to 1969. 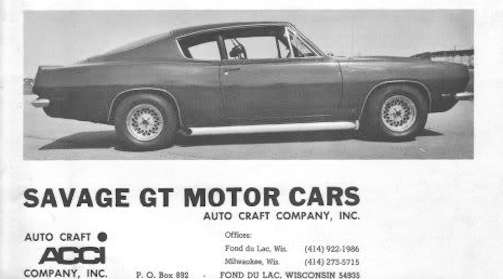 The Auto Craft Company was an American automaker. The brand name was Savage .

The Savage is the work of Auto Craft Co.The company from Fond du Lac (Wisconsin) manufactured automobiles between 1968 and 1969 .

The Savage GT was to the factory's Barracuda what the Shelby Cobras are to Mustangs.The Savage GT was a Plymouth Barracuda offered with more powerful Chrysler engines also had a different grille, wire spoke wheels, chrome tailpipes and a GRP boot lid with a small spoiler.

The basic car is re-styled, then fitted with every conceivable piece of performance and racing safety equipment.

Body revisions consist of a new, stark, grille; a fiberglass hood with competition-type pins replacing the latch, and a big, functional cold air scoop; and a fiberglass decklid complete with functional spoiler.
Inside is the roll bar, with the harness reels attached to the bar above and behind the driver's and passenger's heads. The harness is separate from the seat belts. The wearer first fastens the belt, then shrugs into the harness. The inertia reels allow slow motions, but lock up on impact.
The bolt-on alloy wheels are from Trans American, and have 6-in. rims. Suspension is the factory's high-performance version, with the addition of a linkage of springs designed to stabilize the front end, and a pair of control arms, to locate the rear axle, in back.

The vehicle was a two-door hardtop - coupe or as Cabriolet available. The wheelbase was 2743 mm, the total length 4897 mm.

Three V8 engines were available to choose from, named after the respective displacement in cu.in. 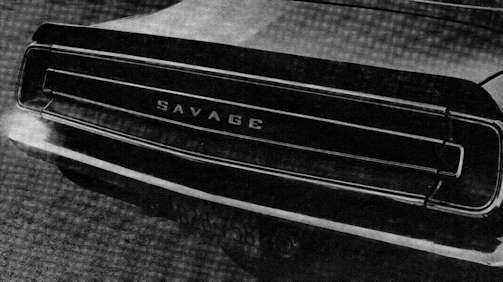 Savage Auto Craft Company
Automotive manufacturer of United States of America from 1968 to 1969.
Updated
Saturday, 02 May 2020
Edited By
MCH