Automotive manufacturer of Bridgeport , Connecticut , USA from 1916 to 1918. 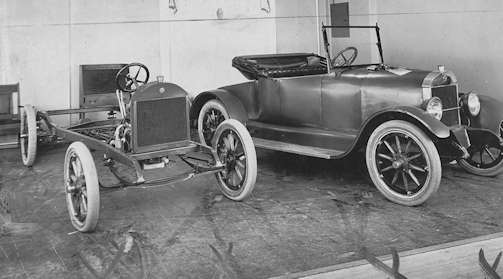 Amston Motor Car Company was an American manufacturer of automobiles from the 1910s, and marketed as Ams-Sterling.

Charles W. Ams was an entrepreneur in Bridgeport , Connecticut . In September 1916 he bought the Sterling Automobile Manufacturing Company of New York . Then he founded an independent company for vehicle production in his hometown.

He began in 1917 in a factory in Amston with the production of automobiles, which were marketed as Ams-Sterling . HP Arndt was the designer. End of 1917 ended production. In 1918 the company was sold.

The production plans amounted to 15 vehicles in March 1917, rising to 150 in September 1917. In fact, created about 30 vehicles. Many customers were dissatisfied with the cars.

The only model largely corresponded to the New York Sterling. The wheelbase was extended to 279 cm. A four-cylinder engine from Le Roi with side valves drove the vehicles. He made 28 hp from 2,263 cc engine capacity . The choice was roadster and touring car .