Automotive manufacturer of Port Orange , Florida.United States from 1979 to 1983. 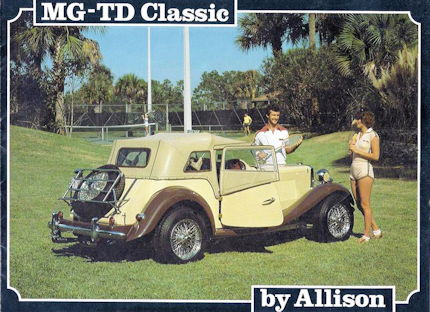 Allison Replicar Ltd. Inc. was an American manufacturer of automobiles from the late 1970s to the early 1980s .

Kenneth C. Allison founded the company on September 18, 1979 in Port Orange , Florida .They started the production of automobiles.  The brand name was Allison .By 1983 the production ended these were pre built cars.

The only model was the replica of the MG TD .Built on A Chassis of the VW Beetle . A Nissan four-cylinder engine of 1,700 cc displacement powered vehicles with disc brakes and adjustable Torsion bar (VW) front suspension with a wheelbase of 94" and length 144".