Automotive manufacturer of Chicago , Illinois.United States from 1910 to 1924. 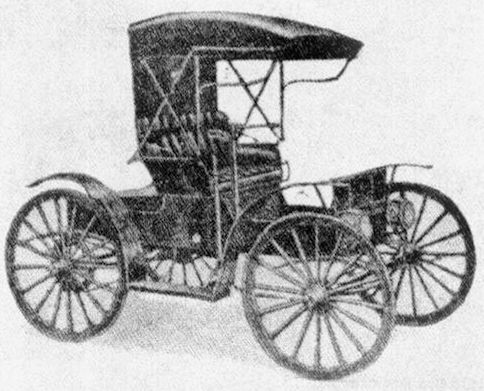 Albaugh-Dover Company was an American manufacturer of High Wheeler - automobiles , tractors and agricultural machines . Brand names were Aldo for the automobiles and Square Turn for the tractors.

Based in Chicago , Illinois , the company was founded in 1910 to manufacture highwheeler Aldo . Gilbert R. Albaugh was an experienced designer who previously for the Thomas B. Jeffery Company in Kenosha (Wisconsin) (brand Rambler ), the Olds Motor Works in Lansing (Michigan) and the Peerless Motor Company in Cleveland (Ohio) had worked. He then constructed the built from 1902 to 1904 star of Cleveland based Star Automobile Company . In early 1904 he broke short termWalter Lorenzo Marr (1865-1941) as Chief Engineer of the Reid Manufacturing Company in Detroit . He revised his design of built from 1904 to 1906 Wolverine , while Marr resumed his former position as chief engineer of Buick .

The only car model of the Albaugh-Dover Company was Aldo , which was very typical of Highwheeler and was only built in 1910 and sold until the beginning of 1911. The brand name is composed of the first letters of the surnames of the owners: Al baugh and Do ver. The vehicle was a very simply constructed, carriage-like motor buggy for two people. The air-cooled two-cylinder engine made 12 PS from 106.9 ci (1752 cc). The power was transmitted via a planetary gearand a drive chainon every rear wheel. The steering by means of lever instead of steering wheel was an outdated design feature. The wheelbase was 76 inches (1930 mm), the huge carriage wheels with wooden spokes had the dimension 36 × 1.5 inches (914 × 38 mm). The vehicle had right-hand steering .

After all, the Aldo seems to have placed more value than usual on choice of material and quality; the buggy cost $395   , significantly more than simple Highwheel buggies like the Success Model A with single-cylinder engine and only one drive chain (on the right rear wheel) to $ 250.

The time of the production setting coincides with the beginning of the short hype about the cycle cars . In addition, the manufacturer seems to have had trouble selling for the mentioned price sufficient vehicles.

Little is known about the time after the end of Aldo production . The company seems quite successful gears and cream centrifuges made to have, since 1916 $ 30,000 was invested in an extension to this end.

In December 1917, the Albaugh-Dover Company took over the ailing tractor manufacturer Kennell-Colwell in Norfolk, Nebraska. The company was in Square Turn Tractor Company renamed and obviously as a subsidiary operated ; the tractor was marketed as Albaugh-Dover "Square Turn" .

The tractor was a rather curious device. This was designed as a tricycle , with a massive four-cylinder engine over the rear axle and a small, steered front wheel. The driver sat directly behind the front wheel and steered with a steering wheel; directly behind him a conventional truck radiator loomed.The engine was a Climax Type K of Climax Engineering Company in Clinton (Iowa) With 5 x 6½ inches bore / stroke (127 mm / 165.1 mm ), resulting in a displacement of 510.5 ci or 8466 cc. The performance was given as 18-35 HP; So 18 HP (NACC) from drawing bar and 35 HP from the belt-driven PTO .The engine could be operated with petrol or paraffin no relation to the British Climax Engineering company.

For the powertrain, the manufacturer chose the name Giant Grip Drive and emphasized that there was no slipping clutch and no susceptible transmission.  The power transmission was by means of friction gear .

With that in base price of $ 1,875 complimentary Oliver - plow , the tractor weighed 7800 lb (3540 kg). The company attached great importance to the finding that the tractor was only one person to operate , which did not seem natural.

In 1924, Albaugh-Dover got into trouble. A group of investors from the existing shareholders took over the company and organized it in 1924 after a capital injection of $ 200,000 new as Albaugh-Dover Manufacturing Company . The production of gears and centrifuges was then continued; the tractor plant in Nebraska, however, by order of the 1925 Sheriff offices sold forcibly. The sheriff at the time was also responsible for the implementation of court orders.