Automotive manufacturer of Canonsburg,Pennsylvania.United States from 1965 to 1973.

The Yenko Chevrolet, Inc.  was an American automobile dealer and tuner, in (Pennsylvania) Canonsburg .

Don Yenko , the son of the founder  since 1957 existing trading company for Chevrolet -Automobile offered initially from 1965 to 1967 a specially tuned Corvair under the name Yenko Stinger .

In 1966 Don Yenko was so impressed by the handling of the Corvair 2nd Series that he tried to get an SCCA racing license for this Corsa model. The vehicle registration office licensed the car with a modified rear seat and modified engine that provided more power and torque. The 100 Corvair Corsa, which were approved in 1966, were all white with blue stripes and were called Yenko Stinger .

Yenko continued to modify Corvair coupes as long as this car was manufactured by Chevrolet. The last Stinger was a coupe from 1969; then the production in Willow Run (Michigan) was discontinued by Chevrolet.

In 1967, when the Camaro appeared on the pony-car stage , Yenko built Chevrolet's 7.0-liter Chevrolet L-72 engine with 425 bhp (317 kW) along with some other tuning parts, creating the Yenko Camaro . The cars were so popular that Yenko used Chevrolet's COPO system (Central Office Production Order) in 1968 and 1969 to install L-72 engines in Camaros, Chevelles and Novas on the production assembly line.

1971 Yenko offered the modified Vega as Yenko Stinger II with 2.3 l R4 engine with turbocharger and 155 bhp (114 kW). Chevrolet never took Yenko's marketing idea, because neither the high-compression engines ordered by Yenko nor turbocharged engines were offered directly by Chevrolet on this model. The Stinger II was offered by Yenko Sportscars until 1973. The high performance and the limited number of pieces make the Chevrolets tuned by Yenko coveted collector's items. 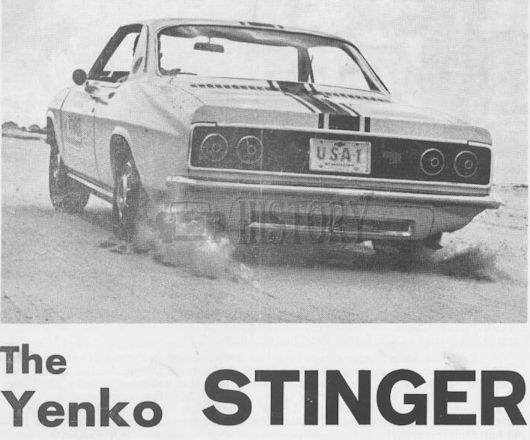