Automotive manufacturer of California.United States from 1953 to 1954. 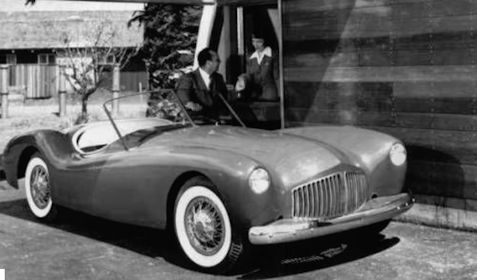 Yankee Clipper was an American automobile brand that was built between 1953 and 1954 by the Strassberger Motor Company in Menlo Park, California .

The only model Yankee Clipper was based on the contemporary Ford Crestline , whose chassis had been shortened to 2565 mm wheelbase.

A glass fiberglass body was put over it , creating a roadster with two doors and two seats. The result looked quite similar to the Woodill . In the engine compartment,it had the  Ford V8 engine with 3917 cc capacity with an output of 130 bhp (96 kW). The engine power was transmitted via a manual three-speed gearbox (on request: Fordomatic automatic transmission) to the rear wheels.  The 860 kg car cost $3,400.