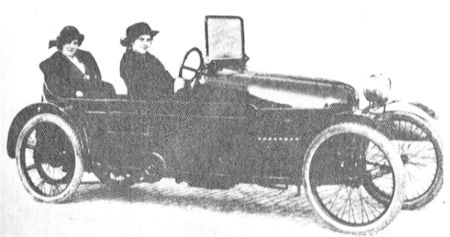 Xenia was an American car brand. Designer was Paul E. Hawkins . Production took place in 1914 at the Hawkins Cyclecar Company in Xenia, Ohio .

The only model was a cyclecar . The car was powered by a De Luxe air-cooled V2 engine with a displacement of 1164 cc, delivering 13 bhp (9.6 kW), and was equipped with an unfavorable combination of planetary gear and belt drive. He offered two people in a row.

The first 25 cars were manufactured in August 1914. One coped the track of Xenia  San Francisco without a breakdown, another won a cyclecar race in Columbus against an O-We-Go and a Scripps-Booth .

In October 1914, the production was discontinued, because it calculated on the basis of the First World War no more sales opportunities. More than the initial 25 copies were not made.