Automotive manufacturer of Downey ,California United States from 1952 to 1956.

The Woodill Motor Company, Inc. was an American automobile dealers and manufacturers, in Downey ,California was established. Founder and owner was Blanchard Robert "Woody" Woodill . Initially, Dodge and Willys cars were sold .

Made between 1952 and 1956, the Wildfire model a two-seater roadster on a Willys chassis. It has a fiberglass-body . Woodill was the first manufacturer to use the bodywork for a production car and ordered 100 in slightly modified form.  This is true of Woodill Wildfire is the first complete GRP automobile , even before the Chevrolet Corvette or the Kaiser Darrin .

Built were about 300 copies, of which only 15 as finished vehicles and 285 as a kit.  There was also a children's car called Brushfire  .

The same body used Glasspar 1954-1955 for its own roadster, the G-2 with prepared V8 engines from Ford or Mercury .

A Woodill starred in the 1954 film Johnny Dark. with Tony Curtis in a Mexico to Canada cross country road race. 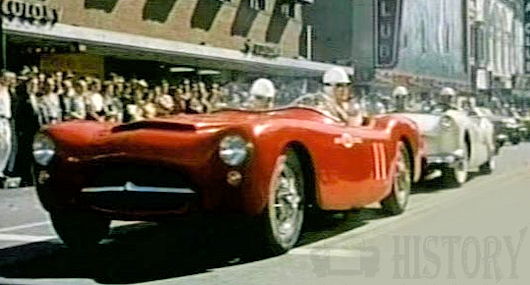