Automotive manufacturer of Ambler Pennsylvania.United States from 1957 to 1991. 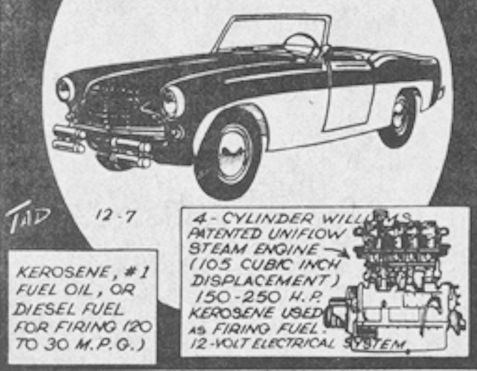 The Williams Engine Company was an American steam car automaker.

The brothers Calvin and Charles Williams led the company based in Ambler (Pennsylvania) . Between 1957 and 1968 they produced steam cars. Then the company was dissolved. Between 1972 and 1991, new developments emerged in a new company, which now included another brother.

Williams converted gasoline-powered cars, mainly from Chevrolet , to steam power.The Williams steam car averages 42 miles per gallon of water, you may the steam car also required kerosene, fuel Oil, or diesel Fuel for firing the steam engine, and that fuel was consumed at the rate of 20 to 30 mpg